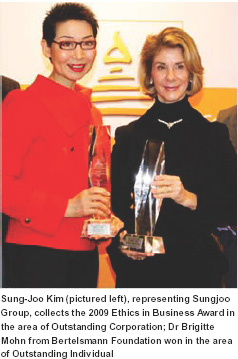 INTERNATIONAL. The International Association for Human Values (IAHV) has recognised Sungjoo Group, owner of the MCM brand, as an ‘Outstanding Corporation’ at the 2009 Ethics in Business Awards, held in Brussels last week.

Sungjoo Group Founder Sung-Joo Kim collected the award at the European Parliament during the sixth Ethics in Business conference on 6 November, where she was a guest speaker.

IAHV, a non-profit organisation that encourages the practice of human values in everyday life, selected Sungjoo Group as an ‘Outstanding Corporation’ for always following the principle of Noblesse Oblige, returning 10% of its profits back to society.

The Korean company’s motto of ‘succeed to serve’ and Sung-Joo Kim’s philosophy of women’s empowerment was also noted with respect and honour. The award paid tribute to Sung-Joo Kim for her “sincere and heartfelt efforts in helping the underprivileged, and for empowering women to realise their role in building a more peaceful, equitable and prosperous world”. IAHV added: “The range of charitable, cultural and humanitarian causes supported by the company is as wide and prolific as the vision of its founder to give something back to society.” 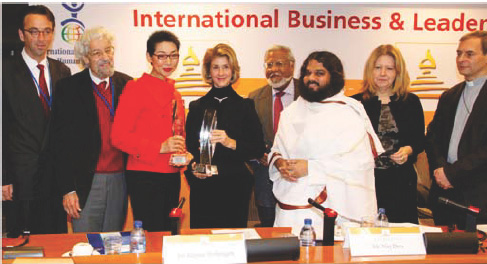 About Sung-Joo Kim and Sungjoo Group

Sungjoo Group Founder Sung-Joo Kim, born in South Korea, is the Chairperson and CEO of Sungjoo Group and MCM Holdings AG. She was ranked among the ‘Top 50 Women to Watch’ by the Wall Street Journal in 2004 and selected as one of the ‘New Century Leaders’ by CNN for the Best of Asia (2003). She is actively involved in promoting women’s leadership and for supporting humanitarian causes worldwide.

Sungjoo Group was an exclusive franchisee for Gucci, Yves Saint Laurent and Sonia Rykiel, and remains the franchisee for Marks & Spencer in Korea. In 2005 the company acquired fashion house MCM’s global business, which had an estimated annual turnover of US$200 million in 2008. MCM has stores in prime locations in London, New York, Düsseldorf, Berlin and Athens, as well as an increasing presence in travel retail.

1999: ‘The 20 Most Powerful International Businesswomen’ by Working Woman

2001: ‘Seven Most Powerful Women in Asia’ by Asiaweek

2004: ‘Woman of the Year Award’ from the Korean National Council of Women

About the International Association for Human Values

The International Association for Human Values, a non-profit organisation founded in Geneva in 1997, develops and implements personal development programmes that encourage the practice of human values in everyday life. It also oversees socio-economic development projects that aim at sustainability, forums for dialogue, and community education programmes that raise awareness of shared values among diverse cultures.