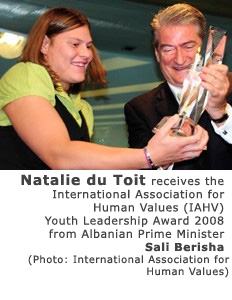 South African Olympian and Paralympian Natalie du Toit joined a select group of international leaders honoured for their contribution to ethics and human values at the European Parliament in Brussels on Friday.

According to Christoph Glaser, a member of the IAHV board in Europe, Du Toit was selected because of her raw defiance in not giving up on her goals. “We admire her indomitable will and strong determination, and the fact that she has become a source of inspiration to the youth of her country,” Glaser said in a statement.

“It is a real honor to be representing South Africa and to receive this award,” Du Toit said. “I would like to give a message to everyone: it is possible for everybody to achieve something. You don’t have to be the best singer, but you can still write your song.

“I would also like to thank everyone for their support: the public in South Africa, the people close to me, everyone. Without teamwork these types of awards would not be possible.”

Founded by HH Sri Sri Ravi Shankar in Geneva in 1997, the International Association for Human Values is a volunteer-based, charitable non-governmental organisation dedicated to the development and promotion of human values in society.